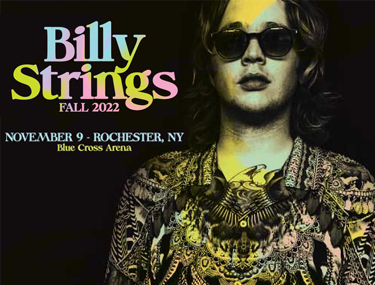 GRAMMY Award Winning Billy Strings is performing for one night only at Blue Cross Arena at the War Memorial, in Rochester NY, on November 9th!

Out now via Rounder Records, Renewal was produced by Jonathan Wilson and solidifies Strings’ position as a singular artist—one who honors the history of the music that inspires him, while continually pushing it forward. With the record’s sixteen tracks, Strings shares a more personal and honest perspective through his songwriting, while incorporating his wide range of influences with elements of bluegrass, classic rock, metal, psychedelic music and more.

“a premier bluegrass mind for this post-everything era…he has zigged and zagged between the form’s antediluvian traditions and rapid-fire improvisations that hit like hard bop, all within songs with hooks so sharp that he seems poised for crossover stardom.”—The New York Times

“In addition to some dazzling picking from Strings and his bandmates, there’s a heaviness to the chord progressions and lyrics that speaks to his love of metal.”—Rolling Stone

“Strings’ high level of musicianship and lyrical sincerity are the kind that defies the boundaries of time and genre.”—Spin A venue presale will go live on Thursday, June 30th at 10am ET on CCTix.com. Presale tickets will be available to those who use the passcode: BCAPRE.

Tickets go on sale to the general this Friday, July 1st at 10am ET on CCTix.com!

Michigan-born and now Nashville-based, Billy Strings is a GRAMMY Award-winning singer, songwriter and musician and one of music's most compelling artists. He is in the midst of a triumphant year following the release of his acclaimed new album, Renewal, which further solidifies his position as a singular artist—one who honors the music that inspires him, while continually pushing it forward. The New York Times praises Strings saying, "a premier bluegrass mind…he has zigged and zagged between the form’s antediluvian traditions and rapid-fire improvisations that hit like hard bop, all within songs with hooks so sharp that he seems poised for crossover stardom.” In addition to his GRAMMY Award, Strings earned Pollstar's "Breakthrough Artist of the Pandemic" in 2021 and "Best New Headliner Award" in 2022 and has multiple honors from the International Bluegrass Music Association. Known for his electric concerts, Strings has performed on the 64th Annual Grammy Awards, The Late Show with Stephen Colbert, Austin City Limits, Jimmy Kimmel Live! and is currently in the midst of an extensive sold-out headline tour with upcoming shows at New York's The Rooftop at Pier 17, Louisville Iroquois Amphitheater (three nights), Chicago's Metro, Indianapolis' TCU Amphitheatre at White River State Park (three nights) and Portland's McMenamins Edgefield Amphitheatre (two nights) among many others. He will also perform at several major festivals this year including Bonnaroo, Lollapalooza and Austin City Limits.